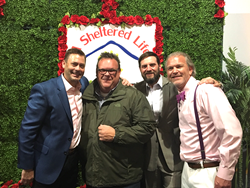 A Sheltered Life held their annual fundraiser gala this past Friday, where they raised $148,786, pushing them past $1 million in overall donations since its founding in 2012. Funds will be shared between International Cooperating Ministries, which builds churches and Hope Centers around the world, and Boys and Girls Country, a Houston-area home for children.

The fundraiser included 11 live auctions and dozens of items and experiences up for silent auction. The highest bids of the night were for the amazing opportunity to have James Beard Award-winning chef Chris Shepherd, of Underbelly Hospitality, create and cook a meal at the home of the winner. Shepherd’s generous donation of his time amounted in $33,000 raised for A Sheltered Life.

Founded in 2013 by three high-school friends, A Sheltered Life was created to help the millions of children throughout the world who are without a home. Jeff Montgomery, Mike Morrison and Sean Wheat traveled to Medelin, Colombia in 2012, where they witnessed first-hand the lack of resources for the many orphaned children in the area.

“It struck our hearts when we went to Colombia,” said Sean Wheat. Upon their return, they decided they could do more than just “write a check” and created A Sheltered Life.

Though each man is modest about his achievements, calling themselves “just three guys,” the power of their friendship has helped with the building of 37 orphanages around the world as well as having an impact in the Houston area. And each year at the gala, they are also “giving a platform for two ministries to tell everyone what great work they are doing,” says Jeff Montgomery.